Compact fluorescent lamps (CFL's), are small household lamp-sized fluorescent lamps. They are generally intended to replace incandescent light bulbs. They have become very popular mainly due to their lower energy consumption (about one-fourth - 25%) for the same amount of light output compared to incandescent light bulbs. As a result, they are perceived as being "green". But, like all man-made devises, there are advantages and disadvantages, pro's and con's to using them. We will present these below, along with references to credible authoritative sources and some conclusions to help you decide when CFL's are right for you.

How do CFL's work / How are they different from Incandescent Lights?

CFL's are a type of fluorescent lamps. This means that the pass electricity through a gas, which becomes charged and emits light. Incandescent lights heat a wire (called a filament) in a vacuum until the wire glows and gives off light... and heat. The heat is wasted energy.

In a CFL, an electric current is driven through a tube containing argon gas and a small amount of mercury vapor. This generates invisible ultraviolet light. But that UV light excites (energizes) a fluorescent coating (called a phosphor) on the inside of the tube, which then emits the visible light that you see. 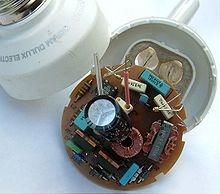 CFLs have two main components: a gas-filled tube (also called bulb or burner) and a magnetic or electronic ballast. Electronic ballasts contain a small circuit board with rectifiers, a filter capacitor and usually two switching transistors connected as a high-frequency resonant series DC to AC inverter. The resulting high frequency, around 40 kHz or higher, is applied to the lamp tube. Since the resonant converter tends to stabilize lamp current (and light produced) over a range of input voltages, standard CFLs do not respond well in dimming applications and special lamps are required for dimming service.

The most important technical advance has been the replacement of electromagnetic ballasts with electronic ballasts; this has removed most of the flickering and slow starting traditionally associated with typical fluorescent lighting. Older CFLs used large and heavy magnetic ballasts that caused a buzzing noise in some bulbs. Most CFLs today (including all ENERGY STAR qualified CFLs) use new electronic ballasts, which do not buzz or hum.

Light is measured by lumens. A traditional 75 watt incandescent light bulb produces 1170 lumens of light and lasts on average 750 hours. But a CFL that produces the 1170 lumens uses only 20-21 watts of electricity. The CFL uses only 1/4 to 1/3 the amount of energy to produce the same light as an incandescent light bulb. The long term savings are improved further because CFLS are expected to last anywhere from six to eleven times longer than their incandescent bulbs. burnout rate. An article in the Wall Street Journal on Janry 20, 2011 stated that PG&E assumed the useful life of each bulb would be 9.4 years, but with experience, it has cut the estimate to 6.3 years, Field tests also showed higher burnout rates in certain locations, such as bathrooms (humid) and in recessed lighting (trapped heat). Frequently turning them on and off also appears to reduce longevity.

Although some companies like Sylvania managed to make small CFLs containing only 1.5 milligrams of mercury, the, the Environmental Protection Agency states that the average CFL contains 4 milligrams of mercury Here are some of the EPA's other statements about mercury in CFL's :

Mercury is widely known to be a health risk if inhaled or ingested, especially in small children, and has always been one of the downsides to CFLs. Mercury is a potent neurotoxin, and it's especially dangerous for children and fetuses. Most exposure to mercury comes from eating fish contaminated with mercury, The use of mercury in CFLs has been the concern of several consumer-advocacy groups, and the EPA has guidelines on how to handle broken CFLs , which can release a small amount of mercury if its tubes are broken. Some manufacturers have even made a CFL light bulb that can contain its mercury even in the event of a tube breakage.

Cleaning up after a broken CFL bulb

Here are some useful guides which you can download and print:

The EPA offers a checklist at epa.gov/mercury that suggests you do not use a vacuum cleaner, as that will only spread the problem. They suggest that the next time you vacuum the area, you should then immediately dispose of the vacuum bag.

Some states and local jurisdictions have more stringent regulations than U.S. EPA does, and may require that you recycle CFLs and other mercury-containing light bulbs. California, Maine, New Hampshire, Minnesota, Vermont and , for , for example, all prohibit mercury-containing lamps from being discarded into landfills. Visit Earth911.com , epa.gov/ng, or lamprecycle.org to contact your local waste collection agency, which can tell you if such requirement exists in your state or locality. Some retailers such as IKEA, take used CFLs for recycling. See the following paragraph for details:

How and Where Can I Recycle CFLs?

Some states, cities and counties have outlawed putting CFL bulbs in the trash, but in most states the practice is legal. As of January 2011, California, Minnesota, Ohio, Illinois, Indiana, Michigan and Wisconsin are the only states that ban disposing of fluorescent bulbs as general household waste.