y now, you have heard about the Coronavirus, that originated in Wuhan, China. In late January, 2020, the World health Organization (WHO), declared Coronavirus as a Global Health Emergency.

Here's what you need to know about it, the latest news, and how to protect yourself and your family.

Overview - the virus started in and spread from China

Coronavirus (now officially called COVID-19) is an airborne respiratory illness that appears to have originated in Wuhan, Hubei Province, China. Chinese authorities identified the new variant of coronavirus. By late January, 2020, there were over 1,000 confirmed cases in China, including cases outside Wuhan City. By the end of February the number was 82,000 worldwide. The CDC (Centers for Disease Control and Prevention is investigating, testing and monitoring as additional cases have been identified in a growing number of other international locations, including the United States. There are already more than 100 deaths, all in China. New evidence suggests that China was aware of the virus as early as November 2019, and used government force to suppress reports and jail doctors, media and even victims. China has since claimed that the virus started in Italy and later claimed it was brought to China by the U.S. These claims are easily disproven, see the charts of the spread below. .

Coronaviruses (CoV) are a large family of viruses that cause illness ranging from the common cold to more severe diseases such as Middle East Respiratory Syndrome (MERS-CoV) and Severe Acute Respiratory Syndrome (SARS-CoV) . A novel coronavirus (nCoV) is a new strain that has not been previously identified in humans.

On February 11, 2020 the World Health Organization announced they have given an official name for the disease that is causing the 2019 novel coronavirus outbreak, COVID-19.

In confirmed coronavirus (COVID-19) cases, the reported symptoms and related illnesses have ranged from mild symptoms in most otherwise healthy people to severe illness and death in elderly and those with other health issues, particularly respiratory issues. Typical symptoms usually include:

The CDC believes at this time that symptoms of COVID-19 may appear in as few as 2 days or as long as 14 days after exposure. This is based on what has been seen previously as the incubation period of MERS-CoV viruses and what they are learning from the current COVID-19 cases.

*This list is not all inclusive. Please consult your medical provider for any other symptoms that are severe or concerning. Despite the rapid spread of the virus, it's mortality rate is very, very low among normal people given decent health care. Yes, people with compromised health and living in countries with poor health systems will have a high death rate. Even there, the rate is under 2%. In America, there have been no deaths and are unlikely to very many. By comparison, the ordinary flu (did you get your flu vaccination shot?) has already killed 187 children in America since January 1st.

See this page for a compassion of COVID-19, the flu and automobile accidents

See this new page for a state by state analysis of factors that lead to a high mortality rate (age, obesity, population density)

Following the spread of the virus is an important way to assess the risk of the virus to you. Keep in mind that it appears that China has known about the virus for weeks or months and has been actively suppressing and downplaying the true numbers, including reports of suppressing it's own citizens who attempt to report on it. This suggests that the numbers inside China may be far higher, even double those reported. You can see the spread on a mapping tool on this website. Johns Hopkins has a comparison by country of the mortality rates: Initial spread of Coronavirus by country In descending order, most cases to least (as of February 5, 2020), country then number of cases. Note: it is likely that there are also many cases in North Korea, but of course, they aren't saying anything! 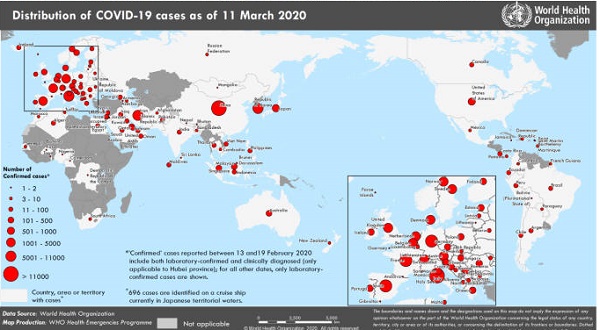 You'll notice there has been a spike in South Korea and Italy and later the UK. These countries are alarmed and acted quickly to contain the spread, but still had a huge spike. .

How is coronavirus spread?

This virus probably originally started from an animal source (some Chinese eat wild animals, such as snakes, bats, rats, etc, which carry new forms of viruses). Coronaviruses are common in many different species of animals, including camels and bats. Rarely, these coronaviruses can evolve and infect humans and then spread between humans. Recent examples of this include SARS-CoV and MERS-CoV. Coronaviruses are zoonotic, meaning they are transmitted between animals and people. The SARS-CoV-2 virus is a betacoronavirus, like MERS-CoV and SARS-CoV. All three of these viruses have their origins in bats. The sequences from U.S. patients are similar to the one that China initially posted, suggesting a likely single, recent emergence of this virus from an animal reservoir.

Early on, many of the patients at the epicenter of the outbreak in Wuhan, Hubei Province, China had some link to a large seafood and live animal market, suggesting animal-to-person spread. Detailed investigations found that SARS-CoV was transmitted from civet cats to humans and MERS-CoV from dromedary camels to humans. Several known coronaviruses are circulating in animals that have not yet infected humans. When humans eat these animals, sometimes the viruses in the animal mutate and become able to infect humans. The Coronavirus appears to have done this, starting in bats in the market in Wuhan, China and is spreading from person-to-person.

Relationship to other viruses

Coronaviruses are a large family of viruses, some causing illness in people and others that circulate among animals, including camels, cats and bats. SARS is another form of coronavirus that emerged to infect people, came from civet cats. MERS, another coronavirus variant, came from camels.

There is discussion in the media about whether the virus originated in a Chinese military lab. At present this could be either a conspiracy theory... or the truth. We simply don't know. We Do know that the Chinese government habitually lies and seeks to protect its image and power. The NY Post supports the theory; while the New York Times is dismissive of it. Given the NY Times horrendous track record of bias reporting and journalists caught in made up news stories... we would lean toward the NY Post's position. Time will tell who's right. And we will report it here when the facts do come out, as they inevitably will!

How the virus is transmitted

It appears that this virus is airborne, being spread but droplets from a respiratory tract, such as sneezes, coughs, mucus, saliva, etc. Touching the droplets and then rubbing your eyes, face, mouth, etc. is the most likely form of infection. The droplets containing the virus could be left on surfaces like doorknobs, tables, cellphones, etc. Or being close to an infected person (6 - 8 ft) could also result in infection. The CDC has since said that the virus is rarely transmitted by contamainated surfaces.

Note: the World Health Organization says "people receiving packages from China are not at risk of contracting the new coronavirus. From previous analysis, we know coronaviruses do not survive long on objects, such as letters or packages."

What are the risks?

This is a rapidly evolving situation and the CDC's risk assessment is also changing rapidly. The latest updates are available on CDC's 2019 Novel Coronavirus website.

There are very, very few people in the U.S currently showing infection (3 or 4, in the whole United States). See the current U.S. case count of infection with 2019-nCoV. At present, the risk for those in the U.S. is very low. By comparison, each year there are about 12,000 to 61,000 deaths annually in the U.S. caused by the flu.

According to The Atlantic, last week, (3rd week in February 2020), "14 Americans tested positive on a cruise ship in Japan despite feeling fine - the new virus may be most dangerous because, it seems, it may sometimes cause no symptoms at all."

How are businesses, events and organizations responding?

We've got a list, which we update frequently, of businesses, events and organizations, and their policies regarding opening and conducting their business or events here.

See this page for prevention and treatment information for Coronavirus.

All about masks - types and what they do, and do not do!

More information about the source and spread of 2019-nCoV